How to rest in game?

Resting will restore characters to full Health, remove Injuries and other long-term afflictions, and restore all per-rest abilities, spells, talents, and item charges. In order to rest,  you need to be out of battle and press  Rest or Wait icon

at the bottom menu. You and other members of your party can consume Food on Rest to remove Injuries and gain various bonuses. 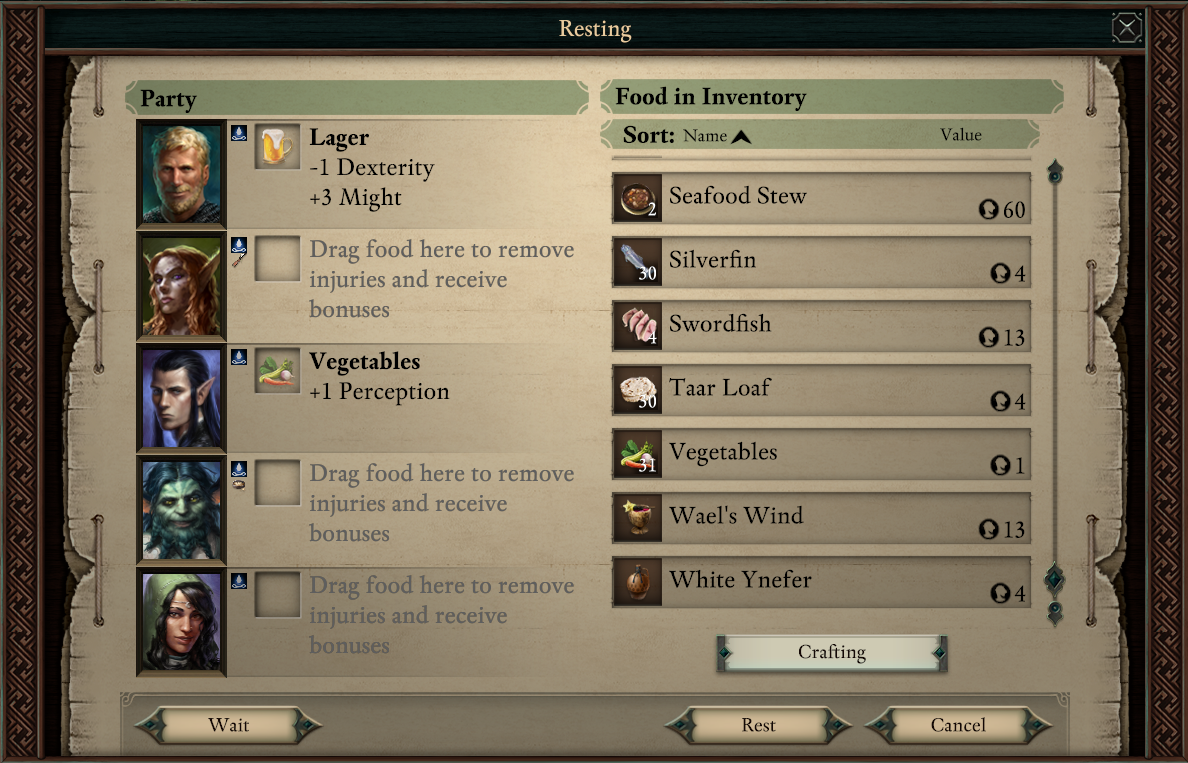 You can also rent a room in the tavern for rest which also provides bonuses to your party (usually, the more expensive room is better).

Duration of Rest is 8 hours. If you need just to wait for some time, you can press Wait button in the Resting window.

Where can I find current in-game date/time?

Drag your cursor over the circle in the bottom menu, and you'll see the current in-game date and time (according to Iroccian calendar, which is commonly used in Eora).

I have been switched into a slow mode when I started combat. How to fix that?

Maybe the default combat speed is too slow for you. Yoy can change combat speed by switching a tumbler in the bottom half of the circle in Actions Menu - the leftmost is the slowest, the rightmost is the fastest.

What happens when my Health goes down to 0?

Health and Death mechanics in Pillars of Eternity II: Deadfire is different from the previous game. Now if your character's Health goes down to 0, they will fall unconscious and remains so until your party wins the battle. After the battle the character one fallen unconscious gains an Injury - debuff which affects their stats and combat efficiency, and can only be removed on Rest by consuming some Food.

When the character which already has 3 active Injuries, is knocked out of battle one more time, he/she will die permanently. For your companions that means failing their personal quests and losing their company, for your main character that means end of game.

If all members of your party are fallen unconscious in the same battle, the game ends and you have to reload your latest save.

How do you enchant gear?

Echanting mechanics was heavily reworked since PoE I. Now only unique Weapons, Shields and Armor can be enchanted. Any item of mentioned types can be upgraded for quality (each higher-tier quality upgrade requires lower-tier quality upgrade, e.g. to make Weapon of Exceptional quality you have it to be of Fine quality first). Also each unique item has its own list of possible unique upgrades, which enhance its combat efficiency. To enchant a particular piece of gear you should right-click on it, then click Enchant button.

Each Enchantment requires certain Ingredients and amount of money. Some unique enchantments also have their upgraded versions which require base version first. Usually you can choose only two unique enchantments from the list, however, there are some exceptions from this rule.

How to raise ship's crew morale?

Your crew's morale can fall for several reasons. Firstly, eating dry hardtacks and drinking plain water is physically and mentally exhausting. Secondly, running from enemy ships, both stronger and weaker, has bad influence on your crew's morale. Finally, various encounters and scripted events also can affect the morale. In the same way you have different options how to raise the morale of your shipmates:

How to feed my crew? 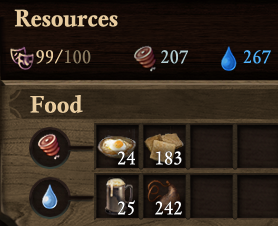 Having a Cook among your crew members (don't forget to put him/her onto an appropriate job slot) reduces amount of Food consumed (only Food, not Drinks). A hungry or thirsty crew loses morale. Crew can suffer only 3 days without Drinks and 15 days without Food, after that their chances to die increase significantly.