Game Progress Route for Pillars of Eternity 2: Deadfire is covered on this page.

You start at Maje, the largest island on southwest Deadfire archipelago. Head to Port Maje after you searched and rescued the survivors of your ship (quest Helping Hands).

At Port Maje, Governor Clario promised to repair your ship if you travel to Engwithan Digsite and find out what happened there (quest Stranded). But before you go, there are multiple side quests at Port Maje, complete them will grant you more EXP and some decent equipment:

Leave Port Maje and explore the island, gather the resources head to Engwithan Digsite. After you explored the Digsite report to Governor Clario.

With your ship repaired you can freely explore Deadfire archipelago, see the map below: 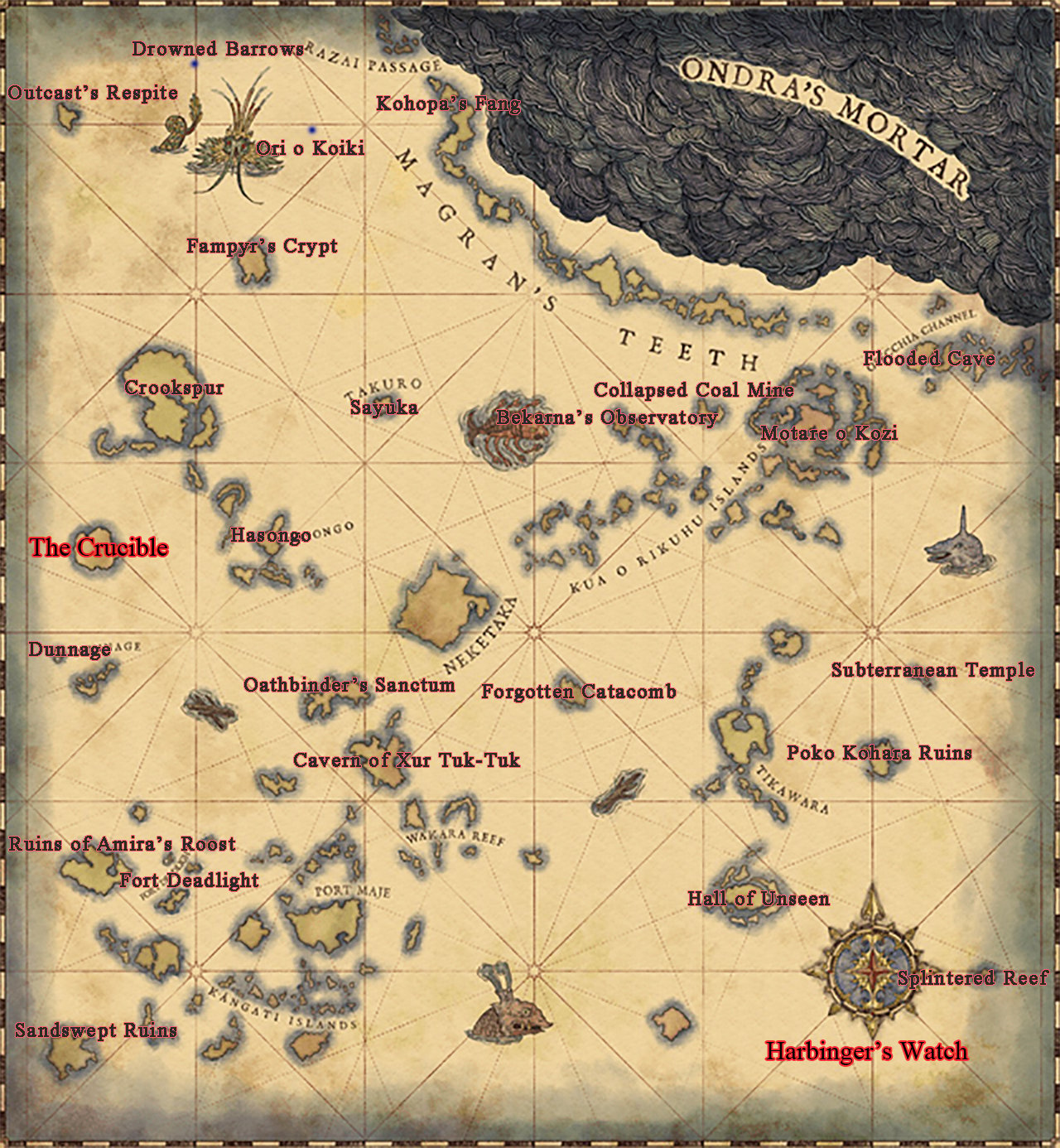 However, keep in mind where sailing your crew needs supplies. And there are pirates patrolling waters far from major cities and ports so don't overextend. You can start by exploring the southwest area of the Deadfire like Sandswept Ruins, Kangati Islands, Wakara Reef, Cavern of Xur Tuk-Tuk etc.

The City of Neketaka is your destination and the main story of POE 2 continued there. It also contains numerous side quests:

After Neketaka, you can explore it's surrounding waters, including Oathbinder's Sanctum, Forgotten Catacomb, Bekerna's Observatory, etc. You should also visit Fort Deadlight and Dunnage, there are lots of Principi related quests, along with merchants selling equipment and valuable ingredients.

The main quest will then take you to Hasongo, you can explore its surroundings like Sayuka, Crookspur, etc. after the second confrontation with Eothas.

Your third confrontation with Eothas will take you to the southeast part of Deadfire archipelago, this time you need to visit Tikawara, Poko Kohara Ruins, and Subterranean Temple.

After you upgrade you ship to higher levels, it is time to explore the northen part of archipelago. Be careful when you sail to Magran's Teeth, pirates there equipped with fast longboat can be very hard to deal with. Locations like Flooded Cave, Motare o Kozi,  Collapsed Coal Mine, and Kohopa's Fang provide you more valuable equipment, as well as some side-quests and enemies.

The last regions you can explore before entering Ondra's Mortar are the northwest and southeast corner of Deadfire archipelago. At Drowned Borrows, there's a strange cult that requires you to collect three grimoires. At Splintered Reef, you can discover the mysteries behind this undead infested island.

If you have DLC The Forgotten Sanctum, Seeker, Slayer, Survivor, and Beast of Winter loaded. There will be three additional locations on the world map: Hall of Unseen, The Crucible and Harbinger's Watch. Visit these regions only you reached lv 14 or higher since they all contain high-level enemies and tons of battles.

To reach the Ondra's Mortar, you need to ally with one of the four major factions in Deadfire archipelago or upgrade your ship to the highest level (Quest The Coming Storm). Once you entered the storm there's no way back, so if have any place left untouched on your charter, it's time to visit them now.

The last region of the game, Ukaizo is pretty straight forward and contains only one quest (The City Lost to Time). Depend on your allegiance, you may encounter different groups at Ukaizo, defeat them and reach Eothas to complete the game.